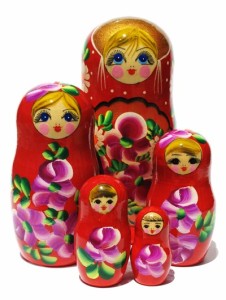 Matryoshka – Russian Nesting Dolls – the title of what has turned into a three book series. Is it about Russian dolls? No. But part of the story is set in Russia. The title reflects the first book that has five stories embedded within. Let me clarify: not five different story lines. Book 1 contains five layers of the same story. Confused? Maybe Wikipedia can help.

“As metaphor: Matryoshkas are also used metaphorically, as a design paradigm, known as the “matryoshka principle” or “nested doll principle”. It denotes a recognizable relationship of “object-within-similar-object” that appears in the design of many other natural and crafted objects. Examples of this use include the Matryoshka brain and the Matryoshka media-container format.”

But there’s more. “The ‘matryoshka principle’ is also an example of Mise-en-abyme.” Mise-en-abyme is a French term derived from heraldry, literally meaning “placed into abyss”.

The movie Inception is an excellent visual example of the Matryoshka principle. Eddie Izzard’s comedy riffs are a verbal example of the concept. If you pay careful attention to his routine (which is challenging since you’re generally laughing so hard) you’ll see that he literally weaves at least half a dozen different commentaries in and amongst one another. In essence, he finds a way to link five rather disparate portions of his routine. An astounding feat of memory and delivery. My job is easier: put it down on paper! Another example on a smaller scale would be The French Lieutenant’s Woman, where the two characters in history are also the actor and actress playing the part and having a relationship. Two is manageable, but I attempted five. Call me crazy.

But then it grew. At the conclusion of the first book, I knew the story wasn’t finished. So the second book picks up where the first left off, and takes you, the reader, in a different direction. But then book 3 ties everything together and adds yet another dimension. Kind of like what’s referred to as the ‘droste effect’. That’s a picture that contains a mirror that reflects what’s in the picture. Here’s an example from the artist Velasquez.

Each chapter and subchapter contains an image and a quote, that serves as a hint to what’s to come. So click on the Writing tab, then Matryoshka, then the link labeled “Part”. Look at the hint. Then go back to Matryoshka, slide your mouse over the Part heading and the subparts will appear to their right. Complicated? Nah…you’ll get used to it. I hope you enjoy reading it as much as I enjoyed writing it.

After I was well into the writing, I got a book from the library entitled Maya, which was about virtual reality. Here’s what Wikipedia says about Maya:

Maya or Māyā (Sanskrit माया māyāa[›]), a term found in Pali and Sanskrit literature, has multiple meanings and can be translated to mean something of an “illusion” (or more accurately a “delusion”).