Van packed up his materials in preparation to leave Mary Ann’s apartment. He thanked her for the tea, and for being so forthcoming. Mary Ann nodded, and walked Van to the door. As he prepared to leave, he turned and asked, “I have the police detective that did the investigation on my list – Bernard Jacobs? I don’t suppose you’d know where I can find him, would you?” Mary Ann shook her head. Bernie’s dead – died in ’98. I believe the only cop associated with the whole thing left is probably Jack Peters. He lives in Queens, over on Grenfell and 80th. If you like, I can call and ask him to call you.” Van replied, “That would be great – I would really appreciate it.” Impulsively, Van reached out to give Mary Ann a hug. She hesitated at first, but then returned his embrace. They parted, and he went back to his apartment.

Van spent most of the rest of the afternoon, alternately entering his notes into his laptop, and cleaning up the apartment. He thought about maybe going down to the 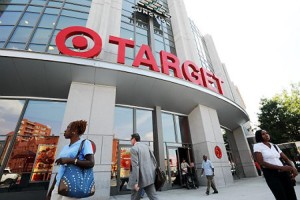 Target store on Flatbush Avenue to get some new curtains for the living room. The ones he had were old, dirty and tattered. He also thought about maybe getting a new sofa to complement his leather chair, but decided he’d pay for it himself after he got his money for the article. The article. He was growing more and more convinced that he had a real winner going here. But there were still three people he need to talk with: this Jack Peters that Mary Ann was going to call, Sophia Farrar, the woman who cradled Kitty, waiting for the cops to show up, and Winston Moseley himself. Van had finally gotten through to the penitentiary, and had requested an interview with Moseley. He was waiting to hear if his request had been granted.

He was on the subway, going to the Target on Flatbush when his cell phone rang. It was the duty officer at the prison, telling him that Moseley had agreed to meet with him. The officer asked if he could make it at 2 PM tomorrow, as that was when Moseley was scheduled for his exercise time. The officer told him Moseley had arthritis ‘real bad’, and much preferred talking over walking. So if Van could make it at 2, Moseley said he’d be ‘most grateful’.” Van agreed and made a mental note to get his materials together before he went to bed tonight for that key interview, and to rent a car to make the 5 hour drive north to Dannemora.

There was a fairly wide selection of 84″ long curtains at Target. Van selected two 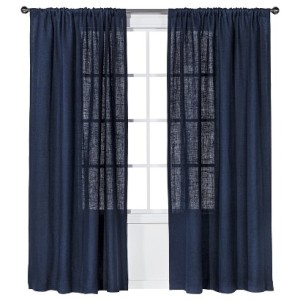 Nate Berkus blue burlap curtains. He thought they would go nicely with his blue leather chair. He also picked out some new towels, a bathmat, and assorted cleaning supplies. The total came to $128.45. He put it all on his Discover card, but decided to repay Maida when he got his money for the article. Every time he thought about the article, he got a warm feeling of satisfaction. He was certain it would be successful, and that it would lead to more work. That notion led to him thinking about Catherine. On the return subway trip, he opened his phone and scrolled back to get her number. He called it, but had to leave a voice message when she didn’t pick up. “Hey, Catherine, this is Van. Just calling to thank you for all your help, and to see if you might like to have dinner with me tonight. I know a great Italian place over on Court. If you’re interested, please call me back. Talk to you soon.” Van pressed the button to terminate the call and put the phone back in his pocket.

When he returned to his apartment, he put the curtains up on the old curtain rods. It looked good, and the new bathroom stuff was a big improvement over what he’d had before. He was finishing up taking dishes out of the dishwasher when his cell phone rang. It was Catherine. He hesitated to pick up, thinking she might turn him down and he didn’t want to spoil his current good mood. It went to voice mail. He waited for the message to register, and then quickly listened to it. Catherine had accepted his invitation, and even asked if the restaurant was the 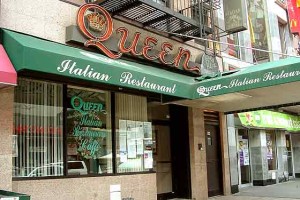 Queen, one of her favorites. She’d said “Unfortunately, I have to work tonight, so could we make it tomorrow night? Call me back. OK. Thanks..this is Catherine…I hope the invitation is still good..uh..bye.”

Van waited to call her back until he was sure she wouldn’t pick up, and left her a message detailing the arrangements to meet her at the restaurant the next night. He thought to himself, “Tomorrow would actually be better. I’ll be able to tell her about my visit with Moseley.” Moseley. Van had forgotten about putting his notes together in his new-found cleaning zeal. He finished up in the kitchen and set to work prepping for tomorrow’s interview. At 11, he went to bed, wanting to get plenty of rest before the interview. He knew this one was critical.

The next morning, Van got up early, ate his usual breakfast, and went over to the

Avis car rental facility on Atlantic. He had a driver’s license, as when he visited Maida she always made him drive her and the damned dog everywhere. He’d reserved a mid-size vehicle, and they assigned him a

convertible Mustang. He took the Taconic Parkway north with the top down, enjoying the good weather and sunshine. When he got to the Route 4 interchange, he saw it went to Rutland, Vermont. He tought about Mary Ann, going back to school and becoming an art teacher. Making something of her life out of the ashes of tragedy. Van mused that maybe his story about Kitty would help him overcome the ashes of what his life had become and put him on a path to success. He was beginning to think that was quite possible.

At a few minutes before two, Van pulled up to the penitentiary gates. He identified himself, and the guard pointed to an area designated for visitor parking. He put the top up, picked up his materials and walked into the prison. He went through the usual searches, and was then admitted to the Visitor area. A small, dark man was sitting at the center table in the deserted room. He looked up and smiled a snaggle-toothed smile. “You must be the man here to interview me about gettin’ my parole. Right?” Van decided not to argue with him, saying “I’m Van Collins. Thank you for agreeing to speak with me, Mister Moseley.”

Van sat across from Winston. There was a guard posted at the door, as Moseley had escaped from

Attica in 1968, taking five people hostage and raping a woman in front of her husband. There wasn’t going to be any repeat of that here at Dannemora. Van got his materials out of his leather binder, and laid them out in front of Moseley. He started with easy questions that he already knew the answers to, such as his age, family background, education after his incarceration, and emotions about Kitty’s murder. Nothing Moseley shared was any different than Van had ready in countless articles. He came across as a model prisoner, educated, thoughtful and eager to begin a new life on the outside. But when Van mentioned his being denied parole last year, his demeanor changed. “I explained to that parole board that for a victim outside, it’s a one-time or one-hour or one-minute affair, but for the person who’s caught, it’s forever.” He was about to go on with his prepared speech, but Van cut him off. “Yes, I know.” Van looked down at his notes. “You also said, ‘The crime was tragic, but it did serve society, urging it as it did to come to the aid of its members in distress or danger. Right?” Moseley nodded. “You certainly seem to have done your homework, Mr. Collins.” Winston smiled conspiratorily. “Since you know so much about me, perhaps you’d be interested in assisting me with my next parole application? You know, the rules of the game have changed. They can’t keep me here forever because they have to abide by Executive Law Section 259 cee that requires the parole board to establish and apply..” Winston thought for a moment, his eyes rising to the top of his head as though to recall something specific. He went on with, “quote, ‘risk and needs principles to measure the rehabilitation of persons appearing before the board’.” He added, “They also have to look at the likelihood of success should the offender be released. They got nothin’ to worry about, lettin’ me go. Because..” Winston lowered his head and spoke softly to Van. “You can’t blame me for any of those women’s murders. I was, in fact, possessed by the devil – yes, satan himself possessed me and told me to do those things. But he’s gone now. So if I was never to blame, and the great Satan has left my body, then I cannot be held any longer. Don’t you see that now?”

Van considered his options in responding to Moseley. He decided to ask him a question he’d already prepared. “Mister Moseley, after you killed Kitty Genovese, and went back home, how were you able to face your wife and child, knowing what you’d just done?” Moseley said, “I don’t believe anybody ever asked me that. But you know, Mr. Collins, I felt just fine. Just fine. In fact, I ate some cereal, and laid down on the bed to rest before I went to work that day. And to this day, I believe that woman invited her own murder. It didn’t have nothin’ to do with those other people. I could see it in her eyes. She wanted me to kill her. Satan was in her too, you know. Satan had possessed her body, and was draining all the life fluid out of it. She told me so. Also, just before she lost consciousness, she looked at me and said, ‘I will go to hell for killin’ my baby.’ And you know what? She looked happy! She was smilin’.”

Moseley became brisk and businesslike. “I have a few dollars put aside, from my selling some stuff about the case and giving interviews. I can pay you fifty dollars to help me write up my parole application. And you don’t even have to worry about it ’til next year. That’s when I’m up again. And I really want to get out of here before it’s too late. Sure don’t want to die in this place. You know?”

Van told Moseley he’d think about his offer. The guard came over, and said to Winston, “Time’s up Moseley. Let’s go.” Winston rose, and Van was somewhat surprised to see he was only about

5’4″, not the 5’8″ previous articles had suggested. Such a small man, capable of doing so much harm. And in spite of his eduction and status as a model prisoner, he still showed no remorse in the murder. Van wondered if he would ever feel any remorse about anything.