Van fell asleep on the couch after 5 straight hours of Hang and Catch Fire Episodes 1-8 from Amazon Video. He’d eaten an entire bag of 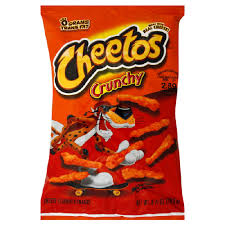 cheetos (the crispy ones, not the soft ones that left that 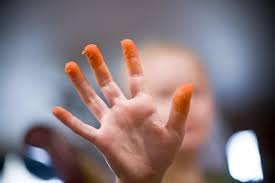 fuzzy orange stuff all over your fingers) and drunk a total of 5 Amstels prior to dropping off. Now it was 6:10 am, and his back was stiff and his neck had a crick in it. He retreated to his bed, grabbing the Ipad as he went. “Might as well finish this assignment today,” he thought.

He started with the internet articles. The best of the lot was, of course, the one from The New Yorker in March of this year – another 50th anniversary thing. In this piece, A Call for Help by Nicolas Lemann, the story is laid out, along with additional references from 50th anniversary books. Van had already picked up on one Lemann mentioned by Catherine Pelonero. Another book mentioned was by a guy named 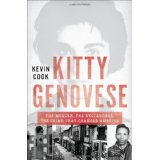 Kevin Cook. And as if to assure Van he was doing the right thing, Lemann pointed out that these two authors interviewed everyone connected to the story and there was nothing new to tell. So why retrace their steps? Especially with a 10/1 deadline looming and for a measly $1500. Van noted the name of the Cook book. He snickered at that when he wrote it down: “Cookbook! I’m cookin’ the books with Cook’s book!”

After plumbing the depths of on-line articles, Van went to newspaper references. The 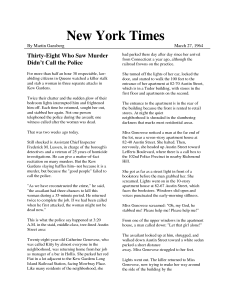 original New York Times article that started the whole myth of apathetic bystanders. The New York Post article from February of this year, debunking the myth, written by a guy that Van vaguely remembered, Larry Getlen. Larry blamed the whole “myth thing” on the Police Commissioner for that period, 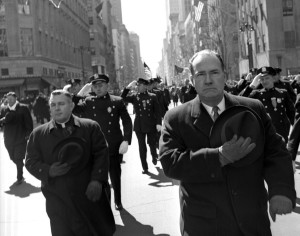 Michael “Bull” Murphy. He was the guy that had lunch with 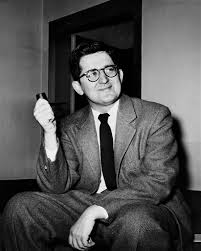 the paper’s editor, Abe Rosenthal. Murphy told Rosenthal a rather embellished version of the story, and Rosenthal wrote the editorial that made Kitty famous.

Van then plundered Google for pictures of the characters in this New York version of a Greek tragedy. The easy ones to get were Kitty’s, Moseley’s, and Abe Rosenthal’s. He had a little trouble finding Commissioner Murphy – kind of a surprise given how politicians loved to have their picture taken. He also tried for the girlfriend, Mary Ann Zielonko, but could only find one of her taken more recently. Van figured if he used that image, Melissa might get suspicious and start looking harder at everything else. The other one he couldn’t find was Sophie or Sophia Farrar, the old woman who had cradled the dying Kitty in her arms, waiting for the cops that never came. He thought about going to the archives of the newspapers to look for a picture, but decided that would be too much work and take too long. Besides, he’d done enough for the money!

He larded the piece with a few quotes that he thought sounded viable, from witnesses and cops. He even thought to add one from Martin Gansburg, the guy who wrote the original story. He considered the whole thing done, but decided at the last minute to look for a picture of Gansburg. When he did, Google pointed out that he’d misspelled Gansberg’s name (has an “e”, not a “u”) and also pointed out that the man had died in 1995. Van went back to the Ipad notepad and deleted the quote he’d fabricated. Instead, he added a quote from an “anonymous” cop he’d allegedly interviewed that said Kitty deserved to die because she was a Catholic lesbian, and God dislikes that combination. With a flourish, Van finished the piece and sent it to his wireless printer, another “gift” from Maida he’d purchased from Staples. The piece ran six full pages, and felt right. Van was pleased with his work, and hoped Melissa would give him another assignment, as a reflection of the quality of this effort. He thought to himself, “What’s the big deal? So I cut a few corners? It’s not exactly lying – it’s using my resources to their best advantage.” And with that, he padded into the kitchen for the first 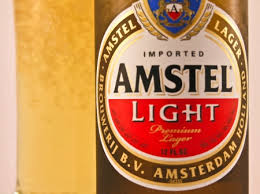 Amstel Light of the day. After all, it was already 9:30. Amstel time!