As Cecilia fastened her seatbelt, she looked out the window at the airplane next to hers on the tarmac. It was a Cayman Airways 737, full of passengers going to the Caribbean to vacation – or maybe to return to their homeland as her grandfather had 10 years before? As her 787 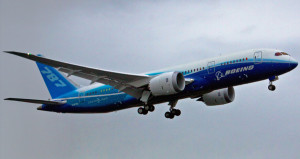 Dreamliner pulled away from the terminal, Cecilia put on her earphones and closed her eyes. She knew the flight to JFK would take 3 hours, and she hadn’t slept well the night before. The enormity of the mission had continued to weigh on her mind, with the result that now she was tired before her journey had barely begun.

The pilot greeting and safety instructions were barely over before Cecilia pushed her seat back and fell into a sleep of exhaustion. She found herself back in Cuba ten years before, packing her things in preparation for her return trip to Miami. She had her grandfather’s birth certificate carefully tucked into the side pocket of the backpack, along with her travel visa and passport. She’d been able to traverse the 8 hour round trip to Oriente province in Father Rodolfo’s old Trabant, hoping the entire trip that the old Russian car would not break down. She gave the records clerk there her grandfather’s information: Juan Lopez, born in Oriente Province on January 15, 1932. It took the young woman only 5 minutes to find the document. Cecilia paid her 23 pesos, and received an official copy of the certificate. 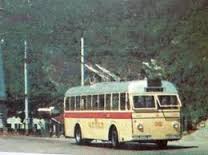 bus trip from Camaguey to Havana on the guagua took all day and most of the evening, with frequent stops and interesting, colorful passengers. Cecilia’s mind recalled the old woman who got on the bus halfway to Havana with a goat and a crate containing a chicken that continually tried to peck at her knee from the adjacent seat. Fortunately, the chicken was unsuccessful, and Cecilia slept through most of the trip remainder after the woman departed at her village.

The intercity bus took her from the terminal to the airport, and her return flight to Grand Cayman was uneventful, as was the connector to Miami. She returned home at 8:30 in the evening, took a shower, ate a light supper, and went to bed. She slept for 12 hours straight, anticipating the conversation she was going to have with her grandfather when she awoke. The next morning, she went to her mother’s house, into the little dining area next to the kitchen. Her grandfather was reading

El Nuevo Herald and her mother was stirring a saucepan of scrambled eggs on the stove. She sat at the table and poured herself a cup of cafe con leche. She looked at her grandfather, who continued to read the newspaper, pretending he was unaware of her presence. Finally, he looked up, and with a weary smile asked, “Well, nieta, did you succeed in your mission?” Cecilia replied, “Yes, I did.” She and Abuelo continued to stare at one another for several seconds, and her grandfather said nothing. Her mother placed a dollop of freshly scrambled eggs on her plate, and pushed the salsa verde in her direction. Cecilia put a spoonful of the spicy concoction on her plate, and began to eat. Casually, she said to her mother, “Mamita, were you aware that Abuelo had a wife and child in Cuba?” She asked the question as though she were asking about the weather. Her mother looked at her for a moment, then at Abuelo. Abuelo casually replied “Technically, she and I were not married.” At that, Cecilia slammed down her fork, and with eyes wide said to her grandfather, “How could you abandon them like that? All these years I thought you were a good and ethical man. Now I find you had a family you abandoned, just to save your own skin. I am shocked and disappointed!”

Abuelo carefully folded the newspaper, and placed it on the breakfast table. He took a sip of his coffee, and then he looked at his daughter and granddaughter. Both were staring at him, until finally he said, “I can explain. There is a good deal of the story neither of you know anything about. I will explain.” With that, he went back to reading the newspaper, and drinking his coffee. Cecilia got up and went onto the back porch, too upset to say anything to either her mother or her grandfather. She sat on the

swing, an act that made her even sadder, thinking about Abuela Cecilia’s back porch and the startling conversation about her family’s history in Cuba. A few minutes later, her grandfather came onto the porch and sat beside her on the swing. They were both silent for a few minutes. Then Cecilia muttered half under her breath, “Your name isn’t even Javier Vasquez. So none of us are authentic.” Abuelo nodded, and said “That is true. You know by now my real name, and likely Cecilia told you how I left Cuba. But she was unaware that what happened after that was for her and our son’s safety and well being. Trust me when I say this, nieta.”

At that moment, her mother came onto the porch, and sat in the chair across from the swing. She said “I’d like to hear this too, if I may.” Abuelo nodded, took a deep breath, and began his saga. I left Cuba in 1957 because had I stayed I would have been killed by the Batista regime. I went to Russia and spent 4 years learning everything they had to teach about nuclear physics and the fundamentals of the

atomic bomb. I was supposed to return to Cuba in January of 1961, but by then the embargo had been imposed. I obviously could not go back to Cuba because I wasn’t Javier Vasquez. If I’d explained to the revolution what had happened to the real Javier, I was afraid his mother would have been put in jail. So I took advantage of the embargo, and when my Aeroflot flight landed in Frankfurt, I changed the destination to Miami instead of Havana. I arrived as Javier Vasquez, ordinary citizen.

I found a job as a janitor at the newly-opened 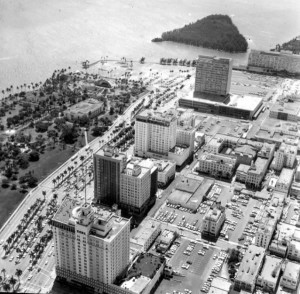 Miami Dade Community College near where I had a tiny apartment in the middle of downtown. I spoke no English, but the college let me take ESL classes at night for free. But still I had to hide my knowledge, for fear of Fidel’s spies finding out about my secret. His spies were everywhere in Miami at that time. I could trust no one. One day, shortly after my new life began, a man I did not know came to me and said he knew about my secret. He told me Fidel was aware of my deception, and because of my history with Batista, I had nothing to fear and should return to Cuba. I told the man I had started a new life here in Miami. I had just met your grandmother, who as you know was a secretary at the University of Miami medical campus downtown near where I worked. I had no desire to return to Cuba, to an uncertain fate. But then the man became more insistent. In fact, he was the person who told me I had a son in Cuba – Juan Lopez Linares, Linares being his mother Cecilia’s name. When I told him I would not go, he said if I didn’t, they would harm this innocent 3 year old boy and his mother. I was in a terrible situation, and didn’t know what to do. I asked him how he expected me to return to Cuba when the embargo prevented anyone from going there? He smiled and then he told me that he was a double agent, working both with Fidel and with the Cuban exiles. He told me they were planning an invasion of Cuba, and the date was set for April 17th. He said I should volunteer with the exiles as part of the invasion. When I got to Cuba, I would be arrested just like the rest, but instead of going to prison, I would be taken to Fidel. He expected me to help him with the nuclear missiles he was asking for from the Russians.

I felt I had no choice but to do what he said. I accompanied the exiles to the 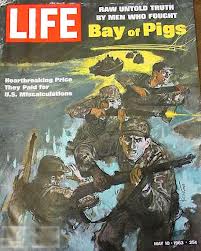 Bay of Pigs invasion, which Fidel was well prepared to crush. As they promised, I was taken prisoner, and sent to Fidel’s headquarters in Havana after a brief stay at the same prison I had been sent to by the Batista regime. When I was taken to Fidel, he said he wanted me to teach him everything I knew about the atom bomb. Since the revolution had made it possible for me to have this education, he said I owed it to him! So for the next 18 months, I worked with Fidel, Raul and Che, teaching them everything I knew about nuclear weapons. Che was the smartest of them all, and understand both the power of the bomb’s threat as well as its destructive capabilities. Raul and Fidel only understood its power to threaten the United States and to prevent an invasion that they knew was inevitable. Then the Cuban missile crisis occurred, the missiles were removed from Cuba, and I was released and allowed to return to Miami.

A bit of turbulence awoke Cecilia from her remembrance of Abuelo’s explanation, and how brief and unsatisfactory it had been up to that point. The plane was about to land at JFK. There would be an hour layover to take on additional passengers and fuel. Then they would leave for Moscow, a 15 hour flight. Cecilia had brought her work with her to stay busy, and to prepare for the conversation she was to have with Nikolai Kardashev. Remembering her grandfather’s courage in the face of unbelievable difficulty gave her a boost of confidence. She was eager to get to Moscow now, and begin her work with her friend and mentor to set things right with the world.