apartment. He was a few minutes early, so he wandered around the neighborhood a bit. Queens and Brooklyn weren’t all that different, both in appearance and demographics. Mary Ann had lived in this apartment on Wetherole Street since the late 90’s, and was pretty established here. Given her age – all she’d admit to was being in her ‘early 80’s’ – and from her appearance, she likely didn’t get out much. So the corner grocery, the nearby subway station, Queens library at Rego Park and the 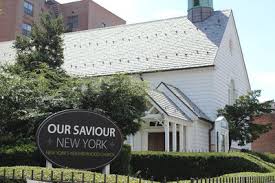 Our Savior New York church were all steps away from her. It seemed clear Mary Ann had led a quiet, anonymous life since her brief notoriety in the 60’s.

Exactly at 11 am, Van knocked on the door of apartment 2E. He heard footsteps, a pause while she looked through the peephole, and then a tentative turn of the knob. She said, “Are you Van?” He replied, in the most humble tone he could summon, “Yes, ma’am. May I come in?” She opened the door just wide enough for Van to enter, and then quickly but quietly shut it and turned the deadbolt. Van wasn’t sure if Mary Ann was locking the world out or him in. Time would tell.

Mary Ann gestured toward the living area. The 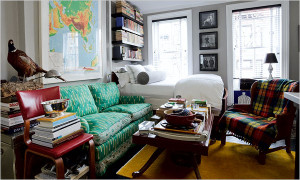 studio apartment was clean and actually quite interesting, with a view through the trees of the adjacent building.

Van glanced at the framed map behind the sofa, while Mary Ann went into the kitchen area to fetch the tea she’d made. The map appeared to be of Asia. Mary Ann came in, and set the tea tray down on the coffee table. “I found that outside on the sidewalk when the folks in 1C moved out. The frame was all banged up, but the map was in good shape and the size was right. I think it’s nice. Van mumbled, “Yes, it fits well there. You have a very nice place here.” Van briefly thought about what a mess his apartment was, and made a mental note to clean up a bit when he returned home from this interview.

The two of them sat together, sipping the tea (Darjeeling with three lumps of sugar and a drop of milk was how she took it – he preferred just sugar). They talked about the weather, the outcome of the mayor’s race and 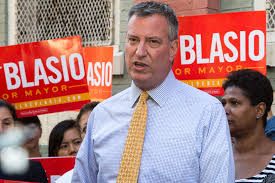 De Blasio’s performance to date. “Not much to write home about, eh?” was how Mary Ann phrased it. Van was beginning to develop an impression of a savvy, alert old woman with good taste, diverse interests and articulate, colorful expression. He was surprised by all of it. Finally, he set down his teacup, and picked up his notepad. He cleared his throat, trying to give Mary Ann the idea that he was ready to begin. Mary Ann continued to sip her tea, and gaze at the stuffed pheasant perched on a piece of wood, atop a stack of books to his right. “I found that around the corner when those two gay decorators moved out. His feathers were kind of dusty, and the wood was dry and cracked. I think I brought him back to life – don’t you?” Van agreed, and said, “Can we get started talking about your life with Kitty?” He immediately regretted being so pushy. When he said, “Kitty,” Mary Ann winced. Van immediately apologized, and said, “Whenever you’re ready to talk, I’m ready to listen.”

Mary Ann set down her teacup, and tucked her feet under her in the chair. She began to speak in a low, somewhat monotonic voice – as though she’d rehearsed this speech, or told the same story a hundred times. After a few moments, Van interrupted her. “This feels like – and frankly sounds like – what you’ve shared with everybody else that’s written about her. That doesn’t do her justice, and frankly obscures the obviously intelligent, articulate woman you likely were and still are. I don’t want to repeat what everyone else has said. It’s too generic and frankly shallow. I want to understand who Kitty really was, and I think the best way to do that is through your eyes, and through your words. So can we put all that other stuff aside – the ‘bullshit’ was the word you used – and please, talk with me about the woman I believe you dearly loved.” Van was amazed at the sincere sound and depth of feeling he’d just displayed to this woman. He had this fleeting notion that he appeared for all the world to be becoming quite good at this trustworthy act. He hoped it would work with Mary Ann.

Again she paused, and smiled slightly. “Busted…OK..yeah.” She picked up the 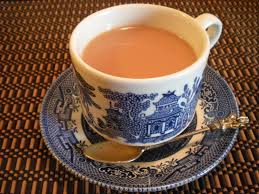 blue willow teacup, poured herself another cup, doctored it with milk and sugar, and began to speak in a voice that seemed to be her own. She began with a deep sigh. “Kitty and I met at a bar. The 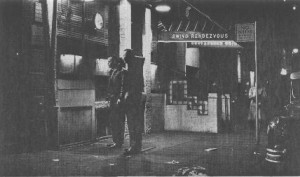 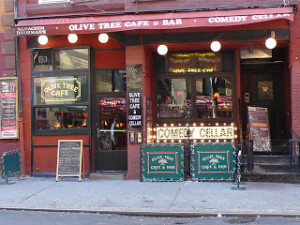 Swing Rendezvous. It’s called the Olive Tree now – over on MacDougal. She’d come there to get some information from somebody, and I was there, frankly to pick up a one night stand. Turns out the girl stood me up, but Kitty and I got to talking at the bar. She seemed like she was very sweet and naive, and was really upset about something. She kept asking the bartender if he’d seen some guy – I forget his name, but she kept asking. He kept saying he didn’t know the guy – after all this was a dyke bar – and she would just nod and sip on her

club soda. Finally, I got her to tell me her name, and a little bit of her background. I could see she wasn’t gay – so Bill was right about that. Kitty was a good Catholic girl, but I could see within a few minutes she was in trouble. So finally I just blurted it out. “You’re in trouble, aren’t you?” is I think what I said. She gave me this wild kind of look, and then put her head down and burst into tears. “Oh, God – I don’t know what I’m going to do,” was all she said, She sat there crying, and I just rubbed her arm. I didn’t know what else to do.

Finally, about 11, I said, “Why don’t you come back to my place and we’ll try to sort all this out?” I thought sure she’d tell me ‘forget it,’ but to my surprise she agreed. We went back to my rooming house. She told me about a brief affair with a guy that frequented the bar she managed, and how she found herself pregnant because the asshole told her he’d had a vasectomy. When she told him she was pregnant, of course then he mentioned the wife and 3 kids at home in New Jersey. Another 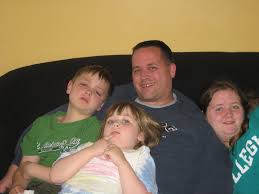 good Catholic guy, you know?” Mary Ann sipped her tea, and grew thoughtful. “That night, she just laid on the floor of my room and sobbed. I just held her – nothing happened – I just held her. Finally, when she calmed down, I said “I think I know some people that can help you. Now this was 1963, 7 years before limited abortion rights were enacted in New York. It was risky, dangerous and expensive to get an abortion if you stayed in town. But I knew a nurse that had a practice that I knew was about as clean and safe as you could get. I contacted her, put her in touch with Kitty and…well, she got it done. But it didn’t go so well. She was such a tiny little thing – there was a lot of damage to her uterus, and she always had problems as long as I knew her after that. In fact, I believe that may have contributed to her death. But I’ll get to that. More tea?”

“Uh, yes – please..thanks.” Van was astounded about what he’d just been told, and thrilled that he had a new angle for his story. He hoped Mary Ann would continue to provide him with these personal details about Kitty that would make his piece bout her really stand out from the rest. This ‘nice guy’ act was really getting him places…he’d have to practice looking sincere more often in front of the mirror. It really worked, particularly on women. “They’re so gullible,” he thought to himself.

Mary Ann continued. “Kitty and I decided to move into 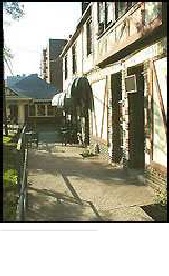 Kew Gardens and live together. It was pretty close to her work. We really didn’t have a sexual relationship, per se, but we truly loved one another. Like I said on the phone, she was the best thing that ever happened to me. I quit drinking, quit going to bars for one night stands – even thought about going back to school to get my degree. Kitty was incomparable, because she was so thoughtful, so sensitive. She was a real artist. Everybody that knew her loved her, but I loved her best, and she loved me.”

The night it happened, I’d gone 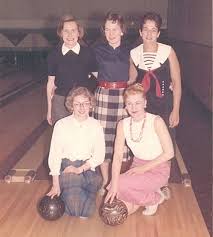 bowling with some friends. Kitty had to work. I thought it was odd she wasn’t home when I went to bed at 11, but sometimes she had to work late to catch up on the bar’s books. The first time I knew what happened to her was when the cops knocked on my door at 4 am. They asked me to go identify her. So I did – under that white sheet. She looked like she was sleeping. But she was so pale – so pale – like that statue of 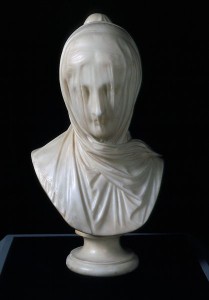 The Veiled Nun at the Corcoran in D.C. After I i.d.’d her, I sat on the curb outside the hospital and just wailed. I went back to drinking and whoring. That’s when Kitty started speaking to me in my dreams – like we talked about when you called. She told me I was too good a person to waste my life. She told me to go back to school and finish my degree – in art. I did that. I taught art history at the community College of Vermont in Rutland for 20 years. I still own a place there – that’s why I was sort of surprised you found my number here. It’s not listed anywhere. By the way, how did you find me?” Van was taken aback for a moment, but quickly recovered and said, “A friend helped me find it – I think she said it was in some 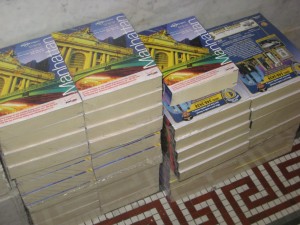 phone directory somewhere.” Mary Ann said, “Oh, yeah.” Then she paused, and drank the last of her now-cold tea.

After a long pause, Van spoke up, saying “You said her .. operation may have contributed to her death? How so?” Mary Ann nodded, and said, “Yeah. After the abortion, Kitty had a real tough time with her periods. Sometimes she’d skip a month, and then the next month she thought she was going to bleed to death. She’d was having a real long period when she was killed. Shed been bleeding for like 3 weeks straight. So when that bastard Moseley stabbed her, she was real anemic, and I’m convinced to this day that if somebody had just intervened a few minutes sooner, she’d still be alive.” Van felt a chill run up his spine – what a fantastic angle he’d just found. He just knew this piece was going to be dynamite, and that Melissa would have no choice but to publish it. He was beginning to feel very confident.

Van put on his newly-found ‘thoughtful’ face. “Does Kitty still speak to you in your dreams?” Mary Ann said, “No, not since way back. I think she thought I didn’t need her anymore. So maybe she moved on – maybe she thought you needed her, so she talked to you. Do you believe that’s possible? Van paused for effect, and looked as though he were giving it serious consideration. All he said was, “Anything is possible.”