If time travel is possible, where are the tourists from the future? 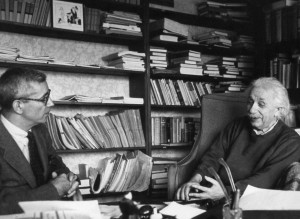 Albert Einstein’s 65th birthday. Cecilia, talking with the team, says, “Hey, team – maybe Albert isn’t coming to work today because it’s his birthday.” Since there is no return comment, Cecilia decided that there can be no communication with the team. She is on her own. She wonders to herself, “If this is unsuccessful, am I doomed to stay here forever? Will this be a one-way trip?” But before she could think any more about that, her avatar heard footsteps coming down the hall. The doorknob turned, and there was the man himself: 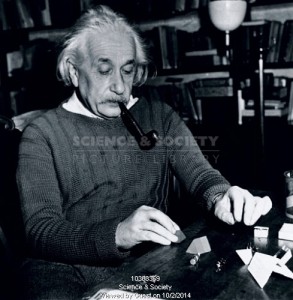 Albert Einstein, looking exactly like the pictures taken of him at this age. He shuffled into the 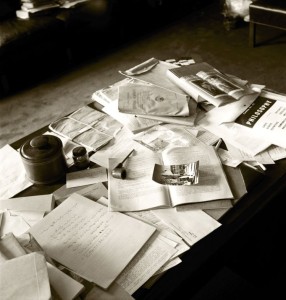 office and closed the door. He didn’t seem surprised to see Cecilia sitting in the chair in front of his desk. He sat in his desk chair, turning to Cecilia and said, “How can I help you, young lady?”

Cecilia was momentarily too stunned at the fact that their effort had succeeded to speak. At last finding her voice, she said, “My name is Dr. Cecilia Vasquez, Professor Einstein. I need your help with a problem in my research.” Albert replied, “Today is my birthday – I’m 65 today.” Cecilia replied, “Happy Birthday, Professor.” Albert said, “Thank you. Now what is this problem you find you need my assistance with?”

Cecilia carefully explained the problem to Albert. He was both amused and thoughtful. He picked up a piece of chalk, hesitated a moment, and then began to lay out a series of equations and related calculations. After 40 minutes or so, he sat back down in his chair. Cecilia looked at the board, carefully assimilating the elegance of his thinking, translated into advanced mathematics. She smiled, nodded at Albert, and reached into her bag to extract her

IPhone. She turned the phone 90 degrees to capture both the equations on the board as well as Albert, sitting in his chair. She clicked the white button, and the phone-camera took the picture. Then she pressed the icon to reverse the camera, and photographed herself, so that the other side of the office was visible, with her in its midst.

Albert looked at Cecilia, asking “What did you just do?” Cecilia retrieved his picture from the Camera Roll, and handed the Iphone to Albert. He looked at his image and his work. “And the other photograph you took?” Einstein handed the phone back to Cecilia. She swiped the camera roll to reveal the next picture. He stared at the image, then carefully examined the instrument, turning it in every direction. He handed it back to her with a smile. “So, young lady, are you a tourist from the future?” Cecilia hesitated to speak, thinking to herself, “If I say yes, I’m afraid this frail old man will have a heart attack and that could change the course of history. I’m not sure that’s a good idea.” Thinking quickly, Cecilia says, “Professor Einstein, I am from a different time and place, but I mean you no harm. You are perfectly safe with me at this moment.” Einstein considered Cecilia’s answer carefully. “Young lady, you are being clever with me. I don’t approve of that sort of cleverness in my students. Please speak plainly and tell me how this has come to be.”

Cecilia sighed, and decided there was no way she could fool the most eminent scientist and scholar the world had known since 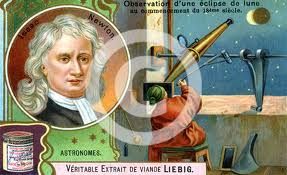 Isaac Newton. “Professor, my team and I have perfected a method of time travel. It requires no

worm holes, or other elaborate and dangerous mechanisms. It only requires the creation of a virtual world that simulates as exactly as possible the time and place we currently occupy. I am, in fact, an avatar, a word you are probably not familiar with. But none of that matters. The important thing is that you have helped me at a time when the world desperately hangs in the balance.”

Albert thoughtfully considered Cecilia’s words. “You say no wormhole or other physical means are necessary? You can slip back and forth in time by creating a game? Have I understood you correctly?” Cecilia replied, “Well, to be perfectly frank, Professor, this is my first time making this attempt. So all I can say for sure is that it appears to work going backward in time. I have no experience yet with going forward.” Albert nodded, saying, “Well, according to my 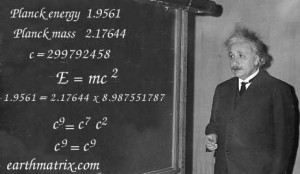 calculations, it should work perfectly well either way. So perhaps you will try going forward in time, and then coming back and letting me know that I am correct in my assumption?” Cecilia said, “Yes, perhaps I can do that, but some other time. I need to attempt to return to my time in order to participate in a competition that, unless I am successful, will destroy my career and possibly our civilization in that time.”

Einstein nods, saying, “Of course, of course. But I must say, I am very pleased that your journey has confirmed my theory about space-time. Is that not so?” Cecilia nodded and said, “Yes in fact I suppose it is indeed so.” Albert smiled, and nodded in return. That’s good to know. Thank you for coming to tell me that and to give me one more problem to solve before I’m no longer able to think clearly enough to be of use to anyone.” Cecilia nodded, and could not think of anything to say other than, “You’re welcome. Thank you, Professor, for all your contributions to science.” She couldn’t resist telling him one last thing. “In the future, children will be given a 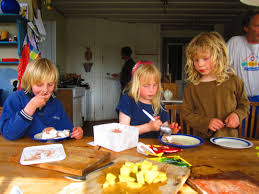 day off from school on this day, in honor of your birth.” Einstein muttered, “Children should go to school to learn.”. But then, after a moment’s consideration he said, “But I hated school. So maybe a day off to play is a good thing.”

Cecilia gave Albert one last smile, and rose to leave his office. Albert says, “Please, young lady, may I be so bold as to ask you just one last question?” Cecilia turned, and said, “Certainly, Professor. What is it?” Albert paused, stroked his chin, and asked, “Do you think I have done the world any favors with my work?” Cecilia stopped, and looked deeply into the old man’s eyes. “Professor Einstein, I will be frank with you. While your work did lead to the creation of the 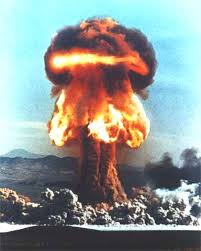 atomic bomb, the world has managed for quite some time to avoid killing one another with it. But it’s your work on gravity and relativity that opened our eyes and led us on a path to so much knowledge. In the future, a rocket ship will carry 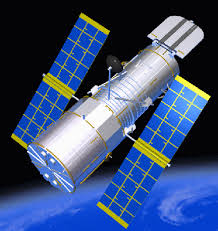 a telescope to the farthest reaches of the universe. The telescope will send back pictures of 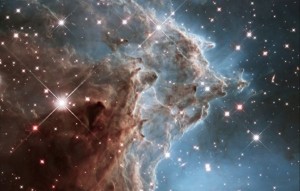 new stars being born. We will have new ideas about the origins of the universe, and countries that hate each other will contribute scientists and funding to build the 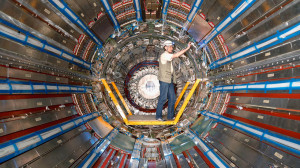 experimental equipment needed to verify those theories. Without your work, none of that would have even been dreamed of, much less created. You are to science what 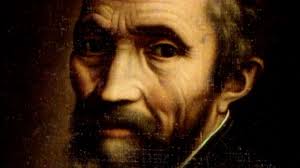 Michaelangelo was to art.” Einstein smiled at Cecilia. “Thank you. You’ve made an old man very happy today. Incidentally, what are the names of this rocket and telescope?” Cecilia was confused for a moment, attempting to remember the name of the rocket that carried the Hubble into space. “I believe the rocket was called Discovery and the telescope was called The Hubble, named for Edwin Hubble. Einstein frowned. “Hubble? You named the telescope for that dumbkopf?” Cecilia laughed, recalling that Einstein and Hubble had known one another. “Yes, it was named for him, but if it makes you feel any better, the first lens was flawed, and another, manned mission was required to go out into space and fix it.” Einstein picked up his pipe, and stuck it in his mouth as he struck the match to light the tobacco. “That is logical. The man could never get anything right the first time.”

With that parting sentiment in her ears, Cecilia left the office, and Javier hit the