Ah, my first official post to the Economics & Investing Page – heavy pressure to be pithy and insightful. OK – here goes. What the heck is going on here? Every day I look at our (well, Emily’s) investments, and every day they’ve gone down in value. These are all good companies, doing well, paying dividends – but still the value goes down. Is it the media hype (Ohhhh, Lawd…dey’s gonna be a ree session comin’ right soon…) or is it prescience of the first magnitude? Soooo, hang on to your hat – here’s my take on it.

It’s some of both, because it’s a vicious cycle (kind of like thoughts are things … you become what you think about …that kind of notion). All us Boomers were caught with our knickers down (is that how you spell knickers?) in ’08, right? Well, not really – we’d gotten out of real estate before the bubble burst and had no investments other than our Florida State Retirement, and that’s effectively an annuity – so we’re OK. But lots of other Boomers with 401-K’s, or all their retirement in company stock that went bust were shocked at how poor they became in a relatively short period of time. So that’s the ‘new reality’. So when the market starts to dip and the media starts using the “R” word again, everybody panics and cashes in their mutual funds, or takes the money out of their 401-K to put it someplace safe – like their checking account (right?) So now what? Mutual funds have to pay those distributions, so they have to sell their investments. Everybody’s selling, nobody’s buying – prices go down. Not wildly – average loss each day is about 1.5% – but now it’s starting to pick up some steam. Media is really featuring the doomsday soothsayers and … voila! We’ll all buy less, pay off more of our credit card debt, and sure enuf – you got yourself two quarters of negative growth. That’s the textbook definition of recession. My sense is we’re already in a recession, because until they measure the growth after the fact – which can take months – you don’t get the official pronouncement. You get the pronouncement, say in late October – that there was negative growth in the third quarter. And then what happens – really bad Christmas retail season, car sales down, layoffs, – gives you negative growth in the fourth quarter – two consecutive – BING..BING..BING…you guessed it. OK, so now we’re in January/February time frame. The real start of the politickin’ season – and what have we got? That’s for another post. But here’s my advice – buy some equities every month…don’t wait – and for heaven’t sake, do not get caught up in the gold thing… 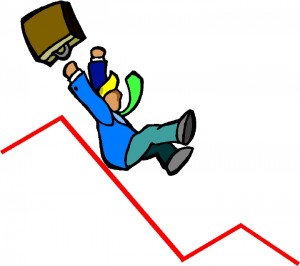 POSTSCRIPT ON 10/2/11 – The Atlantic Magazine’s Daniel Indiviglio wrote a column on this topic, essentially saying things aren’t as bad as they seem. Here’s the last paragraph of his column:

“The big problem is sentiment. Expecting recession can create a self-fulfilling prophecy. If Americans’ spending begins to match their pessimism, then the economy could begin contracting again.”

I Rest My Case – Ouch, Ouch, Ouch…BTW, here’s a link to the actual article if you’d like to read the whole thing…
http://www.theatlantic.com/business/archive/2011/09/americans-think-were-in-another-recession-theyre-wrong/245959/